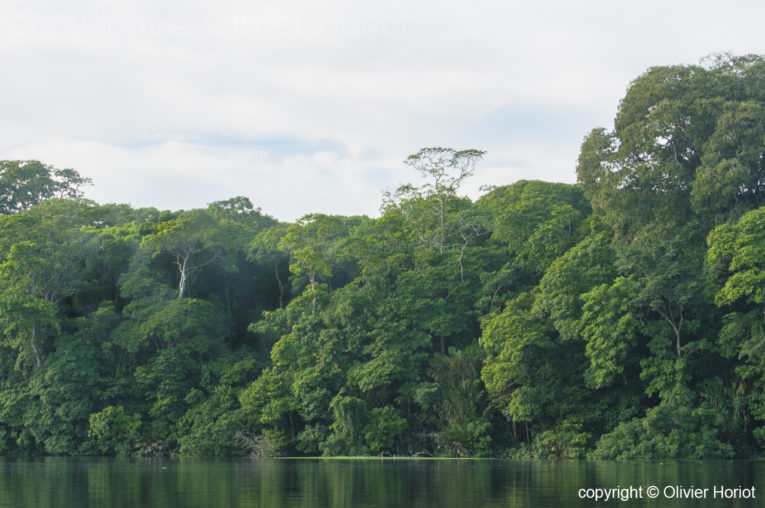 During my last trip to Costa Rica, I had the opportunity to visit the National Park of Tortuguero, located on the Caribbean coast, close to the border with Nicaragua. A network of small rivers flow through this densely forested area, making it best to be discovered by canoe.

WITH A GUIDE OR ON YOUR OWN

So, to visit the park, you surely need a boat, but you can do this on your own or choose to be led by a guide. Both ways have their advantages and disadvantages. A guide will help you find the discreet wildlife which can be very well camouflaged, like reptiles. On the other hand, the costs of the trip will increase, and the time spent in the park will be limited. And the more time you spend in the park, the bigger the chance are of having beautiful encounters. So, in my opinion, for those who want to see a maximum of animals and take many photos, a good solution is to rent a canoe yourself. It will also be cheaper, but on the other hand you will have to paddle yourself in the current. So, it is good to be at least two persons in the canoe, because one can control the boat while the other can concentrate on taking photos.

THE FAUNA OF TORTUGUERO : MONKEYS AND MUCH MORE… 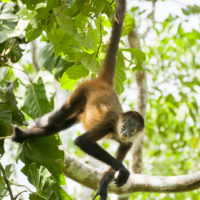 In Tortuguero, one can encounter a number of species typical from Costa Rica. Monkeys are easy to spot and the most commonly seen is the Spider monkey. Having also visited other places in the country, Tortuguero seems to me the best place to see these magnificent tree acrobats. Another species which is quite common is the Howler Monkey. Less frequently observed is the White headed Capuchin (we only saw one group during a three days visit).

There are also plenty of other mammals present, but you need luck or just a lot of time to find them. We had the good fortune to see a Two-toed Sloth, hanging in the canopy, just above the river. In Costa Rica, this species is less common and therefore more difficult to see than its cousin the Three-toed Sloth. We also saw an otter from far away and identified tracks of this mammal on the bank of the river. 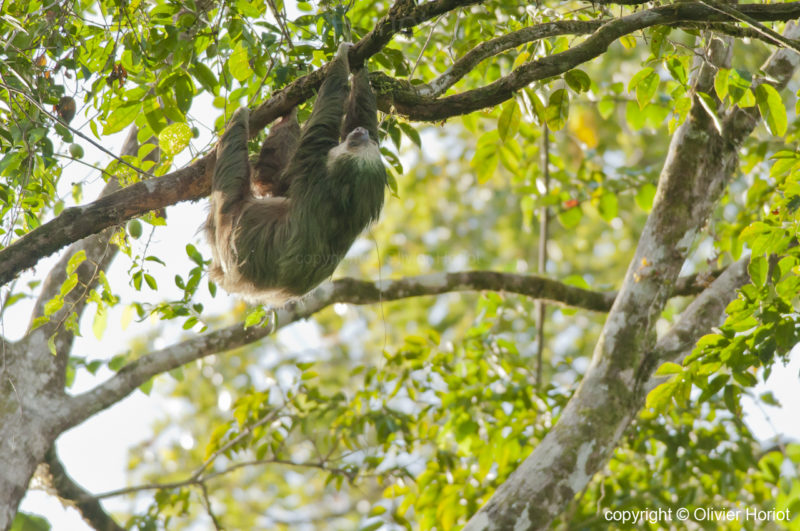 In Tortuguero, you can encounter reptiles from quite up close on the riverside or directly in the water, like the Plumed Basilisk, the Green Iguana or the Spectacled Caiman. 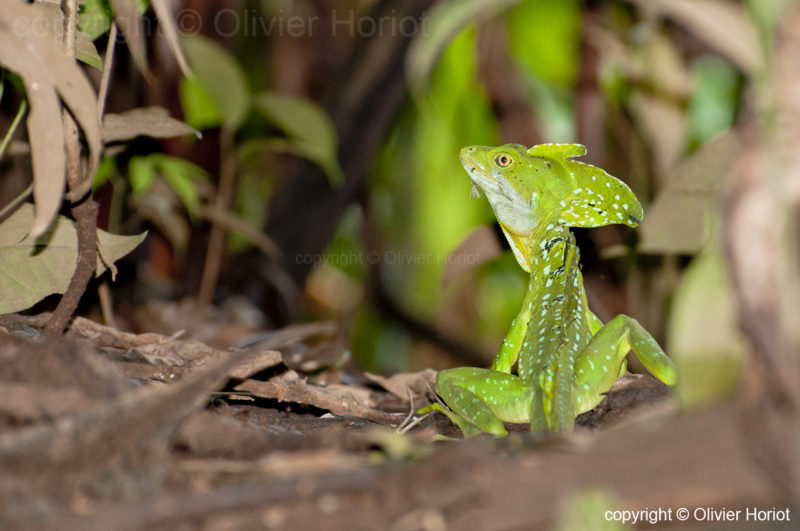 Caimans are almost everywhere, and sometimes just next to the boat. We also have seen young animals of just several days old, with what we thought their mother in close proximity to protect them. There are also plenty of river turtles, which are found on dead trunks taking their sunbaths.

Basilisks are lizards which are capable of running on the water to escape their predators. It is frequent to see juveniles fleeing like this when the boat comes too close, but adults are more difficult to spot, as they are well camouflaged in the riverside jungle. We spotted only one very wary animal and I just managed to make a quick portrait before he disappeared in the dense vegetation. 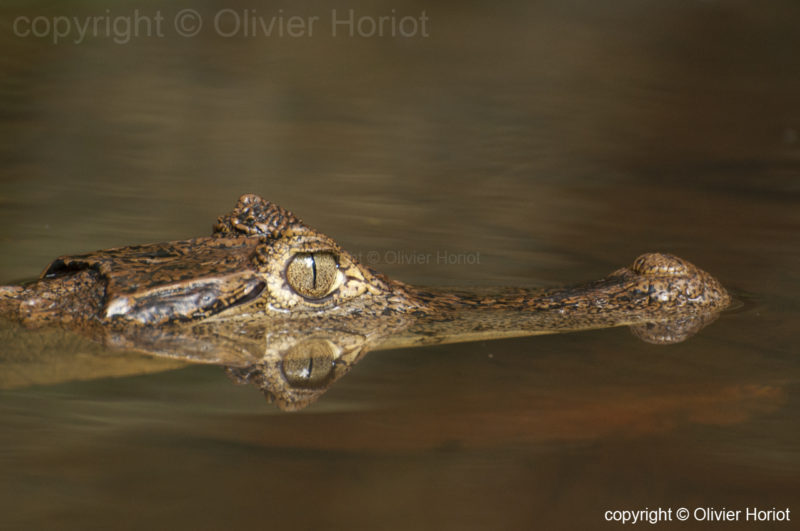 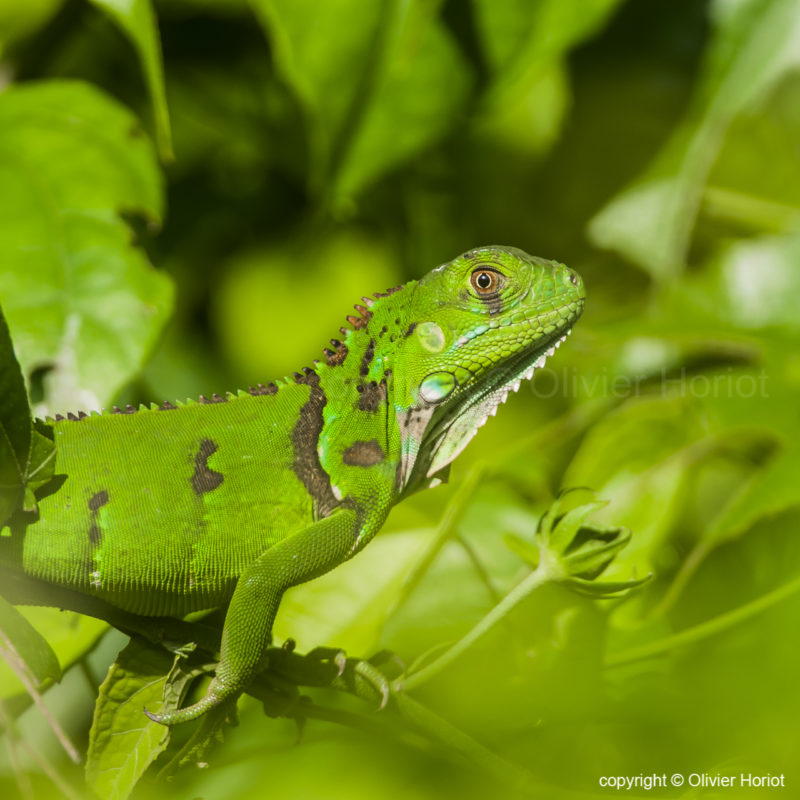 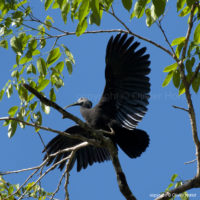 It is easy to observe the aquatic birds, such as the Anhinga, Sungrebe, Jacana and several species of herons, such as the Tiger heron, Blue egret, Green heron, Violet-crowned night heron and Agami heron. It is also possible to spot all species of kingfishers which are found in Costa Rica.

We were lucky enough to encounter a group of Great Green macaws (Ara ambiguus). This is the most threatened species of macaw in Costa Rica, of which there are just dozens left. Other beautiful and colourful birds we saw were the Rainbow-billed toucan (or keel-billed toucan), the Collared aracari, Green ibis and the White-throated manakin. 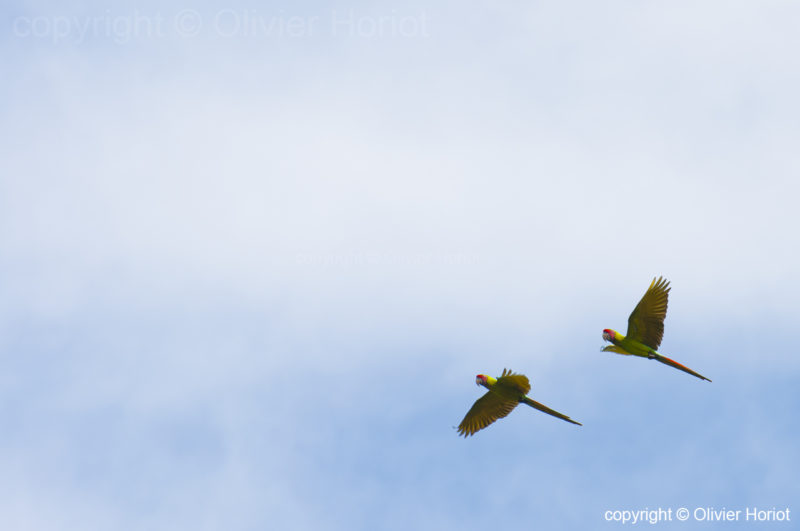 a pair of great green macaw

Next to taking a tour by boat, it is also possible to make a walk on a trail through the forest along the coast. It is less picturesque, but there are still good opportunities to see animals, especially monkeys. In our case, we also came across a Fer the Lance, a very venomous and common viper in Costa Rica .

And, I’ve saved the best for the end: the huge amount of mosquitoes which has only one point in life: drink your blood . Yes, you will have to cope with these bugs if you want to get to all this wildlife. The photo below, featuring an Agami heron, is here to prove it: just try to count the number of mosquitoes flying around the head of this bird (the little grey dots). 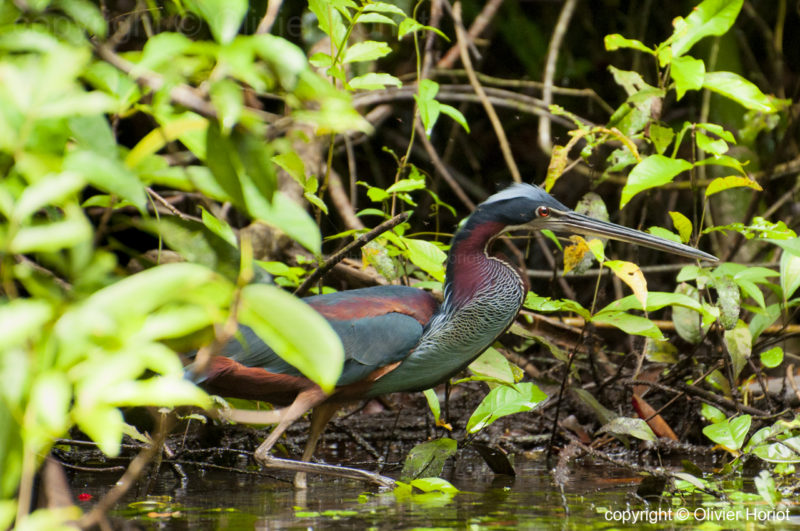 List of species observed during a three days stay in the National Park of Tortuguero: